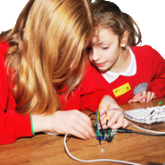 MORE than 100 students took part in a schools’ fringe event that ran alongside this year’s Malvern Festival of Innovation.

The schools’ fringe event was held at Malvern College and allowed schools to attend a series of workshops showcasing engineering and aimed at inspiring students to pursue a career in STEM subjects science and technology.

Together with Clive Beale, Director of Educational Development at the Raspberry Pi Foundation, Little Pi Shop led a series of Raspberry Pi workshops where students wrote code in Python to make LED’s flash.

Each student participating in the “Next Gen Innovators” workshop on Friday took away a Raspberry Pi starter kit, courtesy of Google and the Raspberry Pi Foundation.

The feedback from the event was fantastic, and everyone is waiting for the next opportunity to try out more fantastic projects with their Pi!