Learning to crack the code 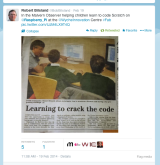 Malvern’s first Student Edition Raspberry Pi Jam – a joint collaboration with Key IQ, CAS (Malvern), and the folk at Little Pi Shop has made it into the newspapers!

The sessions, which are aimed at local Primary and Secondary School are an opportunity to introduce children to coding through the Raspberry Pi. The Raspberry Pi is a tiny, credit-card sized single board computer, which was first started life back in 2006, when Eben Upton, Rob Mullins, Jack Lang and Alan Mycroft, based at the University of Cambridge’s Computer Laboratory, became concerned about the year-on-year decline in the numbers and skills levels of the A Level students applying to read Computer Science.

The Raspberry Pi is an affordable, credit card sized single board computer that you can upgrade and customise for all sorts of really cool projects. It is also practically impossible to break (!), and you can always re upload software back onto it, if the impossible does happen. So whether you want to do basic word processing, use it to stream film or music, have a burning desire to build your own robot,  just play Minecraft, or create your own computer games, then the Raspberry Pi is for you!