What is a Raspberry Pi?

It’s an incredibly capable, affordable, portable, credit-card sized single board computer that is really upgradable and customisable, which basically means you can do loads of very cool projects with it!

Why is the Pi so great?

The Raspberry Pi is great for ‘real world computing’ It comes with industry standard interfaces, low power consumption and a range of inputs/outputs so you can use it with lots of things like your TV, laptop, monitor, or your router at home.

Buy a 4 GB SD card with NOOBS (New Out Of the Box Software) designed to get you up and running with the Pi. It has Scratch a visual drag and drop software developed by MIT – a great introduction for those new to coding. The SD card also has regular operating systems like Raspbian, or media-centre specific Operating Systems like RaspBMC.

Unlike other single board computers,the Pi has GPIO interfaces, which lets you directly connect with real objects like motors, sensors, lights etc. 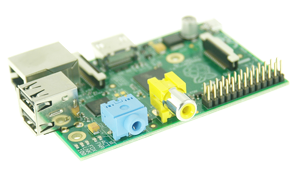 The Pi is great for robotics, remote control cars and home automation. It’s awesome as a media centre for high definition TV (watch films, sport, play games, listen to music), fantastic for weather stations. Build yourself a quad-copter, or find a way to use it in art, music or theatre projects. Of course, it’s also more than capable for firewalls, print, web, or file servers too!

What will you do with yours ?