Around the World in 88 Sounds 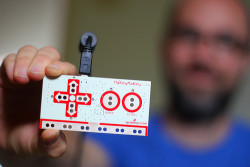 Makey Makey to be used to explore the creative possibilities of code in a schools workshop
organised by Google and led by American artist and computer programmer Zach Lieberman. The workshop is part of DevArt Young Creators, created by the Barbican and Google in London.

Zach Lieberman’s latest work matches musical notes from live radio around the world to the 88 keys on a standard piano keyboard to create unique, ever-changing soundscapes. Lieberman is one of the world’s leading digital artists commissioned to exhibit at Google’s DevArt gallery, part of the Barbican’s Digital Revolution exhibition this summer. The DevArt Young Creators seeks to inspire a new generation of coders and artists to see what they can create with technology as their canvas.”

As well as exhibiting his new work, Play the World, 2014, Lieberman along with the other
commissioned artists will lead a series of workshops for schools and youth groups where kids who have never tried coding before can make their very first creation: a digital butterfly, a piece of music, or a 3D-printed art piece. Makey Makey will feature in Lieberman’s workshops. The platform’s creators describe it as an invention kit for the 21st century.

Anyone can use it to turn everyday objects into touchpads, with the
aid of alligator clips and a USB cable, and combine them with the internet to create – anything. 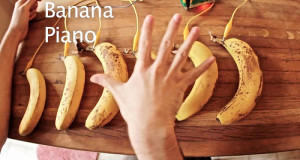 Jay Silver, CEO of Makey Makey, is excited to see the output of the workshops. “We believe
everyone is creative, inventive and imaginative. And that anyone can create the future and change the world,” he says. 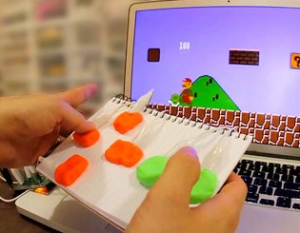 “It is human nature to repurpose the world, you know, leaves and sticks are used to make roofs and structures, stones to make tools… In modern day, how do you repurpose computer programs and pencils? Well it’s already possible to do! Makey Makey catalyzes the process for people of all ages who haven’t tried it yet. Draw a game controller with a pencil and hook it to a video game, and touch the drawing with your finger to actually play the game.”

In creating Play the World, 2014, Lieberman has used code to match the keys on an internet connected keyboard to musical notes sampled from hundreds of live radio stations around the world – from Nigerian sports radio to Brazilian Bossa Nova radio. And because the notes are drawn from live radio, the sound and source changes each time a key is played, resulting in a unique piece of music every time. Speakers and visual displays are arranged in a circle around the keyboard, so you can see where in the world the sounds are coming from. The effect is a celebration of the vast, enchanting, global soundscape that surrounds us.

Begin your own journey of invention with MaKey MaKey here!